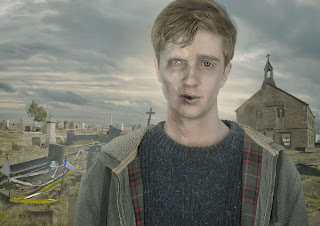 Image: Luke Newberry as Kieran Walker in In The Flesh
May is certainly a quieter month for new and returning shows as it's more of finale month as well as the time when the Big 5 US broadcasters announce their Fall Line Ups time.  Even so, we aren't starved for new content and certainly aren't as starved as the folks in our one new series, the zombies from In the Flesh which debuts on Space this month.

I wish I had more to share for new shows, but that's all I have for now.  I'll be sure to update this post if any additional series crop up.

Series description: " Committed to educating both the living and the reanimated, the three-part supernatural drama series from the BBC tells the story of zombie teenager Kieren Walker (Luke Newberry, Anna Karenina) and his reintegration back into the local community. The series is set in the fictional village of Roarton, England after a zombie outbreak in which thousands of the dead have been reanimated after months of rehabilitation and medication. When the zombies – referred to as partially deceased syndrome (PDS) patients – are deemed ready to return to their homes and families, they’re haunted by the memories of the atrocities they committed while rabid, and also face extreme hostility from the living."