April is a pretty impressive month for new and returning shows. Showcase will be bringing us not one but two science fiction shows with the debut of the multi-platformed Defiance show and online game plus we will also enter into the second season of the Vancouver set Continuum.

The innovation theme continues with Hemlock Grove which is a Netflix original series that will debut concurrently across the globe to all territories where Netflix is available. To start the month off we break with pattern as I included a horror/thriller series with the debut of Hannibal starring Mads Mikkelsen (Valhalla Rising) and Hugh Dancy (Blood and Chocolate). Let's hear it for April 2013! 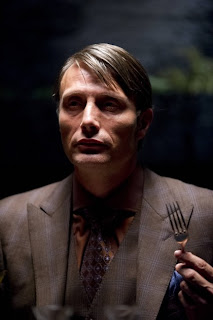 Okay, I'm kind of cheating including Hannibal with our April shows, but horror isn't too far off and last month we included Bates Motel which is similar in nature to Hannibal as both are prequels of horrific stories. Besides, I'm completely thrilled to see the magnificent Mads Mikkelsen and the wonderful Hugh Dancy on TV that I will break my "no serial killers show" rule to check this one out.

Series Description: "Will Graham is a gifted criminal profiler who is on the hunt for a serial killer with the FBI. Graham’s unique way of thinking gives him the astonishing ability to empathize with anyone – even psychopaths. He seems to know what makes them tick. But when the mind of the twisted killer he’s pursuing is too complicated for even Will to comprehend, he enlists the help of Dr. Lecter, one of the premier psychiatric minds in the country. Armed with the uncanny expertise of the brilliant doctor, Will and Hannibal (known as a serial killer only to the audience) form a brilliant partnership and it seems there’s no villain they can’t catch. If Will only knew…"

Hannibal is an American series and season 1 will have 13 episodes; the show stars Hugh Dancy, Mads Mikkelsen, Caroline Dhavernas and Laurence Fishburne.

Find out more about Hannibal at CityTV.com 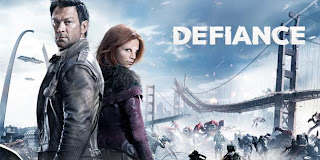 I'm still mystified by the whole game and show part of Defiance, and I don't think I'll 'get' that until I seen and/or experience it. Putting that to the side, I'm so excited to see an actual science fiction series with aliens! Doesn't if feel like forever since we've had that? The show looks slick, the make up and design look amazing and I'm a fan of several of the actors. I can't wait! Thank goodness this happens after Monday nights free up after the Being Human (North American) and Almighty Johnsons wrap up for their respective seasons.

Series Description: "An unprecedented approach to storytelling, Defiance will unite scripted television and online gaming for the very first time. Both the series and the game feature an interconnected world and storylines that will launch in early April with the release of the game and continue seamlessly with the series premiere on the 15th.

Set in the near future, Defiance introduces an exotically transformed planet Earth, its landscapes permanently altered following the sudden – and tumultuous – arrival of seven unique alien races. In this somewhat unknown and unpredictable landscape, the richly diverse, newly formed civilization of humans and aliens must learn to co-exist peacefully. Each week, viewers will follow an immersive character drama set in the boom-town of Defiance, which sits atop the ruins of St. Louis, MO, while in the game, players will adventure in the new frontier of the San Francisco Bay area. The dramatic tapestry of the series and the intense action of the game will exist in a single universe where their respective narratives will inform one another and evolve together into one overall story." 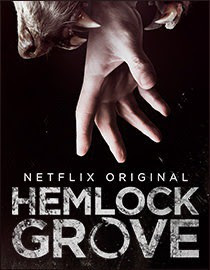 When I first heard about Hemlock Grove it was described as Twin Peaks meets Supernatural, and right then and there I knew I had to check it out. I'm also very curious about the whole airing on Netflix thing, and as a very recent Netflix-er I'm thrilled I will be able to see it! I love that it's debuting concurrently in all territories that Netflix is available including U.S., Canada, the UK, Ireland, Latin America, Brazil and Scandinavia. That's awesome. That's so where we are now, being broadcasted at the same time is the best choice for the viewers. We want to see it, and you give us a way *to* see it. Yay!

Series Description: "After a teenage girl is mauled to death on the outskirts of Hemlock Grove, dark secrets and deep passions emerge. As authorities seek the killer, two suspects from rival families take matters into their own hands. Will they find a man or a monster?"

Hemlock Grove is an American series based on the book by Brian McGreevy and stars Famke Janssen, Bill Skarsgård, Landon Liboiron, Penelope Mitchell, Freya Tingley, Dougray Scott, Lili Taylor and Nicole Boivin. It looks like it's 12 episodes (per IMDB).

Find out more about Hemlock Grove at Netflix.com. 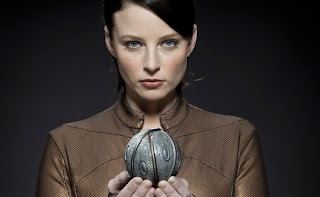 Suzie and I really enjoyed watching and podcasting through Continuum's first season last summer. It is so cool to see a Canadian-produced, Canadian-set awesome science fiction series. And with a female lead who kicks butt to boot. The show has a great science fiction angle with time travel as well as the power of subtle social skills and even some political commentary. Plus, it's smart and a lot of fun. I'm very curious to see where things go in Season 2.

Series Description: "Continuum is a one-hour police drama centered on Kiera Cameron, a regular cop from 65 years in the future who finds herself trapped in present day Vancouver. She is alone, a stranger in a strange land, and has eight of the most ruthless criminals from the future, known as Liber8, loose in the city."

New to Continuum? Or want to revisit Season 1? I've created a spoiler-free episode list to all of the Season 1 episodes that you can watch online at Showcase.ca and Continuumtheseries.com.

Here's information the show media release: "In Episode 1 of UTOPIA, five strangers from an online comic book forum agree to meet after gaining possession of The Utopia Experiments. While three of the forum members – Ian (Stewart-Jarrett), Becky (Roach), and Wilson (Adeel Akhtar, The Dictator) meet at a pub, another is confronted and attacked by two Network henchmen. The only witness to the attack is 11-year-old Grant (Oliver Woolford, Blackout), the fifth forum member, and when he flees with the manuscript, the henchmen chase after him."

And great news, Utopia is already commissioned for a second season. Woohoo!