Pictured - The Cast of Sleepy Hollow
September is just around the corner and with it marks the return of Fall TV. Although the heavy hitter month for Hexed shows is the spooky month of October, we certainly see a lot of shows we care about hitting the small screen in the sweet month of September. It's a free for all than runs the gambit of shows we cover from non-fiction awesomenss of Ghost Mine to many fiction shows, new series like Sleepy Hollow (pictured above) and and returning new faves like The Neighbors.

I would even hazard to say September includes the most highly anticipated show of Marvel's Agents of S.H.I.E.L.D. as well as shows that just popped on the radar like Fangasm. With so many options, it's time to get our TV rooms (or favoured devices) ready and enjoy what the month will bring. Let's take a look what is to come in the September Preview:

Ghost Mine: Back on the Mountain
Wednesday September 4, 2013 at 9pm ET on Space

I'm so excited to share that Season 2 of Ghost Mine will be starting in September.  Suzie and I became fast fans of the show when it debuted in January 2013, completely won over by both the paranormal investigators and the mining crew who all do extremely dangerous and challenging work. We watched and loved every episode of Season 1 and are so happy it's back for Season 2 and with a whopping 12 episodes to enjoy.  If that wasn't enough, this season kicks off with a special episode called Ghost Mine: Back on the Mountain and according the Patrick Doyle's Facebook Page, Adam "Edge" Copeland (who plays Dwight on Haven) will be hosting. This season is going to be so much fun.

Series Description: "In the remote woods of Oregon lies one of the richest gold mines in the United States that was abandoned 80 years ago when a series of tragedies gave it an infamous reputation for being haunted. Now, a new owner has decided to take on the notorious legend and reopen the mine, assembling a colorful team of miners – both seasoned and new – to battle the elements along with a pair of experienced paranormal investigators, in hopes of finding a fortune. This strong-willed and superstitious group of miners will face the day-to-day challenges of mining, aided by the paranormal investigators who unravel the mysteries surrounding the mine, including historic Masonic connections and a spirit who has been known to haunt the area for generations."

Ghost Mine Season 2 will consist of 12 episodes.

See more about at Ghost Mine at Space.ca. 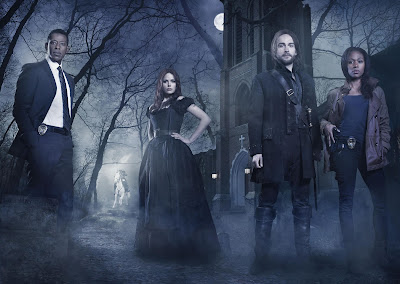 It's too soon to say if this one if a show we will be chatting about, but we are hoping there will be a spooky side that comes out and it not be too procedural and/or Americana (not holding our breath on that one!). But it's definitely got great atmosphere and an interesting story, which is always a great start.

Here is a series description: "This thrilling new action-adventure drama is a modern-day retelling of Washington Irving’s classic tale. Ichabod Crane (Tom Mison, Parade's End) is resurrected and pulled two-and-a-half centuries through time to find that the world is on the brink of destruction, and that he is humanity’s last hope, forcing him to team up with a contemporary police officer (Nicole Beharie, 42) to unravel a mystery which dates all the way back to the founding fathers." 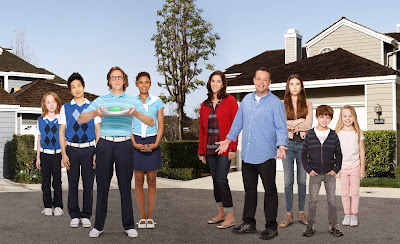 We were late to the game on the delightful science fiction comedy of The Neighbors, but once we got on the train we didn't look back.  It's such a quirky show, following a human family that unknowingly moves into a gated community of aliens.  I have to tell you, the first episode I saw was the Halloween one, and boy-oh-boy I didn't even know who were the aliens!  But over time it became clear who was who, and that some aliens just want to have fun.  This was a surprizing stand out to last years new shows, and I'm very much looking forward to seeing it's sophomore season.

Series Description: "THE NEIGHBORS follows one family’s attempt at a normal life in the suburbs, only to discover that the neighbours are aliens masquerading as suburbanites. Debbie (Jami Gertz) and Marty Weaver (Lenny Venito) recently bought a home in Hidden Hills, a coveted gated community in New Jersey, to provide a better life for their three kids. It's clear from day one that the residents of Hidden Hills are a little different. For starters, their new neighbors all have pro-athlete names like Reggie Jackson (Tim Jo), Jackie Joyner-Kersee (Toks Olagundoye), Dick Butkis (Ian Patrick) and Larry Bird (Simon Templeman). To their horror, the Weavers soon learn that the entire community is comprised of aliens from Zabvron masquerading as suburbanites where the men bear children and everyone cries green goo from their ears. Two worlds collide with hilarious consequences as everyone discovers they can "totally relate" and learn a lot from each other."

See more about at The Neighbors at CTV.ca. 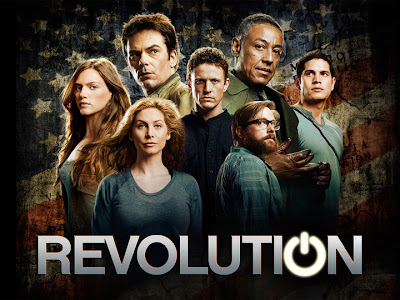 We only talked about the first few episodes of Revolution, and I'm not sure either of us will be watching it this year (it got too Civil War Americana themed and not enough science fiction-y for me) but I know that people do watch it as it's one of the higher rated shows we cover.  So, if you watch it - enjoy!

Series Description: "Our entire way of life depends on electricity. So what would happen if it just stopped working? Well, one day, like a switch turned off, the world is suddenly thrust back into the dark ages. Planes fall from the sky, hospitals shut down, and communication is impossible. And without any modern technology, who can tell us why?

Now, 15 years later, life is back to what it once was long before the industrial revolution: families living in quiet cul-de-sacs, and when the sun goes down, the lanterns and candles are lit. Life is slower and sweeter. Or is it?

On the fringes of small farming communities, danger lurks. And a young woman’s life is dramatically changed when a local militia arrives and kills her father, who mysteriously – and unbeknownst to her – had something to do with the blackout. This brutal encounter sets her and two unlikely companions off on a daring coming-of-age journey to find answers about the past in the hopes of reclaiming the future.What would you do without it all? In this epic adventure thriller from Supernatural’s Eric Kripke and J.J. Abrams’ Bad Robot Productions, a family struggles to reunite in a post-apocalyptic American landscape: a world of empty cities, local militias and heroic freedom fighters, where every single piece of technology — computers, planes, cars, phones, even lights — has mysteriously blacked out … forever."

Season 2 of Revolution will consist of 22 episodes.

See more about Revolution at CityTV.com. 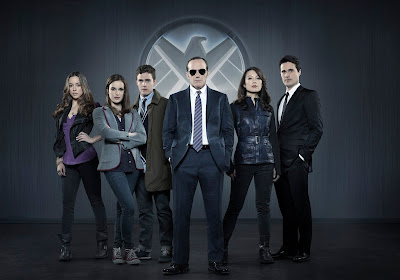 Marvel's Agents of S.H.I.E.L.D. is definitely one of, if not the, most anticipated new series this fall.  Getting an actual team of superheroes show on TV is so exciting that it's almost hard to even stand waiting.  I'm really cheering for it to be awesome, and if the trailer is any indication I think we are in for one wild ride.  And given that it deals with the 'unknown', that *technically* makes it a paranormal show!

Series Description: "Clark Gregg reprises the role of Agent Phil Coulson from Marvel's feature films in MARVEL’S AGENTS OF S.H.I.E.L.D., as he assembles a small, highly select group of Agents from the worldwide law-enforcement organization known as S.H.I.E.L.D. Together they investigate the new, the strange, and the unknown around the globe, protecting the ordinary from the extraordinary. Coulson's team consists of Agent Grant Ward (Brett Dalton), highly trained in combat and espionage; Agent Melinda May (Ming-Na Wen), expert pilot and martial artist; Agent Leo Fitz (Iain De Caestecker), brilliant engineer; and Agent Jemma Simmons (Elizabeth Henstridge), genius bio-chemist. Joining them on their journey into mystery is new recruit and computer hacker Skye (Chloe Bennet)."

See more about Marvel's Agents of S.H.I.E.L.D. at CTV.ca.

I'm not quite sure what to make of Fangasm, and I'm not sure if it's actually some kind of competition show or not.  But, Stan Lee (awesome) and fandom is enough to get me to watch it.  And at only 6 eps, it's going to fly by quickly.

"From the producer of Jersey Shore comes Fangasm – a six-part docuseries that celebrates the incredibly unique, often misunderstood, and infinitely fascinating fan girl and fan boy culture. The show follows seven pop culture-obsessed fans (whose passions range from comic books and collectibles to science fiction and fantasy) living together in an LA apartment complex and working together at Stan Lee's Comikaze Expo. The seven must contend with each others oversized personalities and conflicting fandom as they vie for an opportunity to work within Lee's organization.

Because when different passions come together, you get a real big bang."

Fangasm is a 6-part docu-series.

Once Upon a Time is a show I continue to be surprized at that I've not jumped into watch, although I know Suzie watches it.  I always love looking at the stills and I feel like I've seen it through the years with snippits and commercials along the way.  It's great to see a fantasy series doing so well, I'm thinking the early timeslot and family appeal has a lot to do with it. I don't know if I'll jump in this year, or one day wait and catch up on the whole thing.  But for the fans of the show get to start back up right at the end of the month.

Series Description: "ONCE UPON A TIME is a fairytale set in modern times. Emma Swan (Jennifer Morrison), a 28-year-old bail bonds collector has been on her own since she was abandoned as a baby. But when the son she gave up years ago finds her, everything starts to change. Henry (Jared Gilmore) is now 10 years old and in desperate need of Emma’s help. Henry believes that Emma is the missing daughter of Snow White (Ginnifer Goodwin) and Prince Charming (Josh Dallas). According to his book of fairytales, they sent her away to protect her from the Evil Queen’s curse, which trapped the fairytale world forever. Emma isn’t a believer, but when she brings Henry back to Storybrooke, she suspects his strange New England town may be more than it seems. Storybrooke is a magical place where fairytale characters are alive, frozen in time and can’t remember their true identities. To win the good vs. evil epic battle, Emma will have to accept her destiny and fight like hell."

See more about Once Upon at Time at CTV.ca.