Outlander Coming to Showcase in 2014 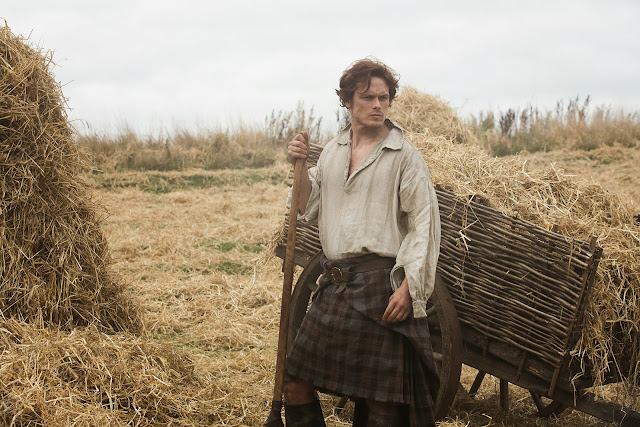 Sam Heughan as Jamie Fraser in Outlander, coming to Showcase in 2014

At times, I shy away from sharing info on a new series until we have know it will be airing on a Canadian broadcaster. That is exactly what happened with Outlander, whose home channel is Starz but now we know it will have it's Canadian Broadcast Premiere on Showcase in 2014 it's time to bask in the Outlander love.

If you are unfamiliar with Outlander, it's an upcoming TV series based on the time-travelling historical/adventure/romance novels by Diana Gabaldon. Much like Bitten, everyone I know who ever started the novels has been swept into the world of the book and absolutely adores them. I've been tempted to dive into this female-protagnoist time-travelling romance novels myself, and might see if I can read them before the series starts. Who those who are familiar, the protagonist Claire Randal will be played by Caitriona Balfe, and Sam Heughan will play Jamie Fraser. Outlander also stars Tobias Menzies, Graham McTavish and Gary Lewis.

Here is more about the show:

"Outlander spans the genres of romance, science fiction, history and adventure in one epic tale. It follows the story of Claire Randall (Caitriona Balfe; Escape Plan), a married combat nurse from 1945 who is mysteriously swept back in time to 1743, where she is immediately thrown into an unknown world where her life is threatened. When she is forced to marry Jamie Fraser (Sam Heughan; Batman Live), a chivalrous and romantic young Scottish warrior, a passionate affair is ignited that tears Claire's heart between two vastly different men in two irreconcilable lives. Adapted from Diana Gabaldon's international best-selling books, Outlander is executive-produced by Emmy® Award-winner Ronald D. Moore, and also stars Tobias Menzies as Frank Randall/Jonathan "Black Jack" Randall, Graham McTavish as Dougal MacKenzie, Gary Lewis as Colum MacKenzie, Lotte Verbeek as Geillis Duncan, Duncan Lacroix as Murtagh FitzGibbons Fraser, Annette Badland as Mrs. FitzGibbons and Stephen Walters as Angus Mhor."

Outlander has a 16-episodes order. See more at Outlander website, Wikipedia page and for the image happy folks check out their Instagram stream.
Posted by Shannon at 4:47 PM