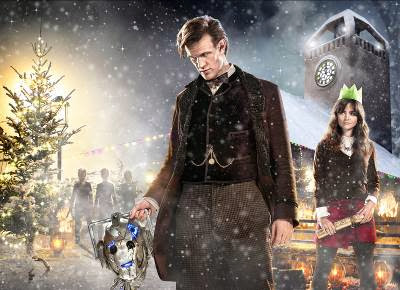 This years SPACE-MAS keeps getting crazier. We always tried to avoid spoilers (and please see massive spoiler warning above), but it feels like common knowledge that this years Doctor Who Christmas Special will see a passing of the Tardis from actor Matt Smith's Doctor to a new face. Before the next regeneration, a special farewell to Matt Smith will air on Space, looking at the actor who won many hearts in the recent series of the show.

Here are details on the special:

"Stiff upper lip, Canada, regenerations are a Time Lord’s reality. To soften the blow, on Christmas Day at 8 p.m. ET, Space gives viewers a second chance to say “goodbye, sweetie,” with the brand-new special, Doctor Who: Farewell to Matt Smith. This one-hour retrospective documentary pays tribute to the beloved Eleventh Doctor from Seasons 5, 6, and 7 of Doctor Who. Narrated by Alex Kingston (ARROW), who plays River Song, the special features highlights from the Matt Smith years, as well as interviews with the man himself, former castmate Karen Gillan (NOT ANOTHER HAPPY ENDING), tenth Doctor David Tennant (BROADCHURCH), executive producer and head writer Steven Moffatt, and a bevy of guest stars and celebrity Whovians. To make way for the Mr. Smith lovefest, the previously announced Christmas special, THE TIME OF THE DOCTOR, moves to 9 p.m. ET, airing immediately following the farewell."

Here is a description of this years Doctor Who Christmas Special:

"In THE TIME OF THE DOCTOR (Wednesday, Dec. 25 at 9 p.m. ET), massed forces of the universe’s deadliest species, orbiting a quiet, backwater planet, gather to a mysterious message that echoes out to the stars. Rescuing Clara from a family Christmas dinner, the Time Lord and his best friend must learn what this enigmatic signal means for his own fate and that of the universe."